During the 19th century the progress of industry and science went hand in hand with the process of secularisation; people no longer found the answers to life’s big questions in their traditional (Christian) faith, and turned to new religious, philosophical and ideological currents. Around 1900 especially the intellectual avant-garde found itself attracted to the organizations like freemasonry and theosophy. Esoteric symbolism found its way to the arts through the work of these members. The membership of esoteric currents by artists and its relevance to their work was openly mentioned in (Dutch) newspapers at the time. Joséphin Péladans occult Salons de la Rose + Croix lay fresh in art critics memories; Piet Mondriaans interest in theosophy was widely known; and architect Karel de Bazel made the headlines with this design for the temple of his masonic lodge in The Hague.

The start of World War II marked a sudden end to this openness. The Nazi regime ordered the abolishment of many esoteric organisations and confiscated their buildings and possessions. The Nazis also directed an intensive propaganda campaign against freemasonry and related organisations, insinuating they were part of a Jewish (‘Zionist’) conspiracy. Fear of persecution prompted many families, including artists, to destroy their membership papers and other documents between 1940 and 1945.
After the war, esoteric organisations were ‘damaged’ on many levels: after enduring years of negative propaganda and the loss of many members in the violence of war, they now faced a long judicial process to regain the rights to their buildings and property from the Dutch government. This may explain why they chose to prioritize internal matters, instead of seeking the public eye and try to counteract prejudices. This allowed many misconceptions, sown by the Nazi regime, to endure in the collective subconscious. Because artists archives had been cleansed of ‘sensitive’ documents, the post war generation of art historians often failed to recognize the influence of esoteric currents.
During the second half of the 20th century, the term ‘esoteric’ was increasingly associated with New Age consumer fads. For many art historians this was a reason to shun the subject. They did not want the intellectual genius of an admired artist to be  blemished by highlighting his or her woolly interest in the esoteric or the occult.
Other complex factors also played a role in this process. Here lies an interesting PhD-project into rejected knowledge, waiting for a student to pick it up. Whatever the precise cause, while esotericism could count on the attention of the art World before the war, the subject was largely ignored by the art historical field after 1945. 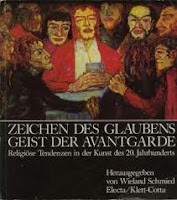 The 1960s saw the foundation of the first academic chair for the study of western esotericism at the university of Paris. The interest in the subject by art historians was rekindled in the 1970s, stimulated by publications by Sixten Ringbom (The Sounding Cosmos. A Study in the Spiritualism of Kandinsky and Abstract Painting, 1970) and Robert Pincus Witten (Occult Symbolism in France: Joséphin Péladan and the Salons de la Rose + Croix, 1976). Within art history, esotericism was mainly viewed within the context of the decadent fin-de-siècle and the subject was touched upon in exhibitions on broader themes like religion and spiritualism, mental illness or outsider art. Examples are: Zeichen des Glaubens. Religiöse Tendenzen in der Kunst des 20. Jahrhunderts (Stuttgart 1980); The Spiritual in Art: Abstract Painting 1890-1985 (Den Haag 1986-87); Okkultismus und Avantgarde. Von Munch bis Mondrian 1900-1915 (Frankfurt am Main 1995); Im Reich der Phantome. Fotografie des Unsichtbaren (Mönchengladbach 1997), en Kunst & Wahn (Wenen, 1997).

While historians of religions had supplied clear definitions, art historians kept confusing terms like ‘spiritualism’, ‘spiritism’, ‘mysticism’, ‘occultism’ and ‘esotericism’. The ‘family tree’ of esoteric currents and their influence on specific currents in art remained unclear, especially to the exhibition public. Conclusions were drawn without consulting the historical archives of the relevant esoteric organizations and the enlightening correspondence by artists contained within these archives was missed. A strong citation culture amongst art historians meant, that misunderstandings would be perpetuated instead of being corrected.
The foundation of chairs for western esotericism at European universities, such as the Chair for the History of Hermetic Philosophy and Related Currents in Amsterdam, gave a strong impulse to interdisciplinary research from the end of the 1990s onwards. But the interest of Dutch art historians kept lagging behind international developments.

Art historians Marijo Ariëns, Marty Bax (previously involved in The Spiritual in Art), Andréa Kroon and Audrey Wagtberg Hansen met in 1996 via ARIES, an interdisciplinary study group on western esotericism, and its later international successor, ESSWE. We have since drawn attention to esoteric symbolism in art through both individual and joint projects.

Examples are: the conference Kunst en Westerse Esoterie. Een traditie in de kunst van de 17de eeuw tot heden (Van Gogh Museum, 1999); the start of the OVN foundation, its research projects and conferences including Masonic & Esoteric Heritage. New Perspectives for Art and Heritage Policies (Dutch National Library, 2005); research into the esoteric interests of Helene Kröller-Müller (Kröller-Müller Museum, 2002-03); and exhibition on artist and theosophist Henri Verstijnen (1882-1940) (Assen/Den Haag 2006-2007); the exhibition Holy Inspiration. Religion and Spirituality in Modern Art  (Amsterdam 2008); and the city guide Geheim Den Haag. Vrijmetselaarstempels en andere esoterische gebouwen in Den Haag rond 1900 (Nieuwe Haagsche, 2011).
Bax published a dissertation on theosophy and art (Het web der schepping. Theosofie en kunst in Nederland van Lauweriks tot Mondriaan, SUN 2006), while Ariens’ dissertation explores the influence of esotericism on Picasso and the Surrealists (De wangen van de Macroposophus. Een nieuwe
interpretatie van het schilderij 'Les Demoiselles d'Avignon' van Pablo Picasso). Kroon expects to finish her dissertation on The role of Dutch freemasons in the cultural and commercial exchange with Asia, 1735-1852 in 2012.
While in the 1990s we were ‘lonely callers in the desert’, as the Dutch saying goes, younger art historians have since studied at the chair for Hermetic Philosophy in Amsterdam, whose  interdisciplinary approach will further broaden the boundaries of the art historical field of study. Meanwhile, many esoteric organisations have opened up and digitalized their historical libraries and archives, making more and more sources accessible for art historians. The TheArtArchives are now also online, providing international access to an important primary source.

Apparently it takes a long time for new perspectives and research results from academic circles to filter down to the daily practices of the art world. Exhibitions like The Perfect Medium. Photography and the Occult (New York, 2004) and Das Bauhaus und die Esoterik (Hamm/Wurzburg 2005) broke little new ground. Other museums passed up on potential box office hits.

In 2006 Bax and Kroon worked together on the exhibition and publication concept Verborgen werelden. Esoterische stromingen in de kunst, 1800-1940 (later: Geheim!). We envisioned an exhibition introducing an overview of various esoteric currents, their history and key figures, and exploring how specific art currents and artists had soaked up and expressed these influences. The proposal was picked up by the Van Gogh Museum, the Singer Museum and Boom/SUN publishers, but budgetary matters prohibited the cooperation from materializing. 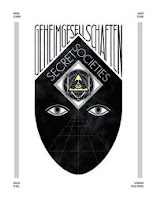 Accepting that Holland might be too small, we approached the large European museums in 2007 with the more internationally orientated concept The Initiated Artist. Art & Western Esotericism, 1800-1940, which was supported by international experts in the field of study, the Amsterdam University Press and the Iona Foundation. Museum managements responded with enthusiasm, but felt an overview of esoteric currents was too ‘complex’ a subject to draw large visitor numbers. However, several exhibitions were organized shortly after, which discussed esotericism in ‘safe’ terms, such as spiritualism and artists networks. Examples are: Schilders van de Ziel. Symbolisme in Frankrijk (Laren 2007); Traces du Sacré (Paris/München 2008); Holy Inspiration. Religion and Spirituality in Modern Art (Amsterdam 2008); Albert von Keller. Salons, Séancen, Secession (Zürich 2009) and Geheimgesellschaften. Wissen Wagen Wollen Schweigen (Frankfurt 2011).

By now, western esotericism is recognized as an integral and important aspect of art history.

We have had a tremendous amount of fun playing a part in that process, together with many others, and can happily consider this a joint objective achieved.

So for us, this is the right moment to close the chapter on ‘art & western esotericism’ for a while and focus on other lacunas in art history. We will still be able to apply all the expertise gained, but will explore and invest in other, fresh, interdisciplinary research paths. And of course we already have new and exciting exhibitions plans on offer. Any takers?