The exhibition of Anna Cassel and Hilma af Klint. Stockholm 1913 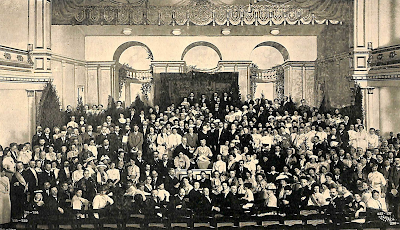 In 2013 and 2017 I wrote several blogs on the art of Hilma af Klint, in which I pointed out that research had only started, and that art production can never be separated from the impulses an artist gets from his/her social surroundings: people, ideas, political circumstances, literature, work of other artists, just to name a few sources. Since that time more literature on Hilma af Klint has been published, but alas: much of my objections to the way she is pictured as the ‘lone Swedish genius of abstraction’ still stand.

It all comes down to basic research. Of primary sources. Of contemporary sources. Of contemporary literature, especially when it comes to interpretation of iconography of 'occult' art. As in all research facts need to lead the way. Facts need to be amassed from many different sources. Time-consuming, yes. Illuminating, yes. Facts can end up painting a totally different picture than what has been reported in history. It is very important, for instance, to check the information in ‘autobiographical’ reports against information from other sources, before this information solidifies into a fixed image. Do the facts correspond? If not, why not? For which reasons were facts distorted, left out, inflated?

Hilma af Klint is said to have first exhibited her ‘occult’ art in 1928 in London, at the occasion of an Anthroposophical conference. She and her art were labeled as ‘Rosicrucian’. Understandably: from 1907 the president of the Anthroposophical Society, Rudolf Steiner, had coined his Theosophy as ‘modern Rosicrucianism’. Hilma had become a true fan of Steiner. So that fits, doesn’t it? In 1932 she wrote that she was unhappy about her reception, that people didn’t understand her art and thought it best to have her work behinds lids for the next twenty years.

The 1928 exhibition however was not her first. Fifteen years earlier Hilma and her life-long friend and financial, emotional and artistic pillar-behind-the-scenes Anna Cassel were part of the exhibition organized by the European Confederation of the Theosophical Society, which was held in Stockholm in 1913. When I wrote down these facts in 1990 while researching the 1904 Theosophical exhibition which was held in Amsterdam to prepare my dissertation, I could never have envisaged that my notes would become important. But well, that is what researchers do: hoarding information for you-never-know-when. 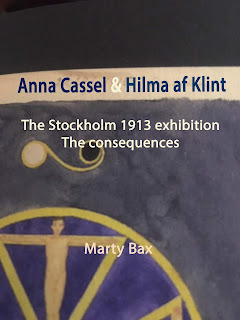 The analysis of the Theosophical Stockholm exhibition has led to surprising discoveries. The exhibition itself had a completely different character than the previous exhibitions of the European Confederation in other European cities. The analysis of the group of artists also provides essential corrections on the work of Hilma af Klint, but not only of hers. Of Anna Cassel as well. Of the groups in which they operated. All women named in the séance notebooks of the group De Fem and other groups, of which both artists were a member, have been identified and have been given a face. All of these women are immensely meaningful for the socioeconomic, spiritual and artistic influences they had on the artists.

The 1913 exhibition functions as a starting point for a more elaborate discussion of the type of exhibited works and the consequences for the interpretation of themes; the ideological backgrounds of the work and shifts in orientation; the networks in which the artists operated and which have influenced them; and the reception history of Hilma af Klint, which has incorrectly determined and influenced the interpretation of the work and of the group.

The book can be ordered here.