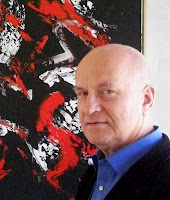 Last week the St. Petersburg concert pianist Andrej Hoteev flew in from Hamburg, his current residence, to be interviewed and filmed about his friendship with Ben Joppe (1915-2007), artist and private secretary of the orchestra conductor Bernard Haitink, and about all the historical events leading to this friendship. It was a truly inspirational meeting, in romantic surroundings, with an excellent team of professionals: artist Guido Pera, Ben's last close friend; Jeroen Hommels, restorer and dealer of Steinway pianos; Robert van Voren, expert in Russian mental healthcare and professor in Sovietology and Oral History in Kaunas (Lithuania) and Tbilisi (Georgia); and Vincent Nijman and Fuji Rademaker, a swell camera team. We also made a history tour to Ben Joppe's house, still intact in Zeeland, where Andrej could see the painting he first saw during his visit to Ben's apartment in the 1990's, above the Steendrukkerij Amsterdam. Which is where I met Ben, during my job as the gallery assistant. History can move in strange circles.

For the memorial exhibition on Ben Joppe, held in 2011, I closely studied his personal archive. It contained personal letters from a young and aspiring pianist from St. Petersburg: Andrej Hoteev. Who was he? I was really fortunate to track him down in the Hamburg area. Could he possess the counterpart of the correspondence? What were his memories of Ben? What was not said in the letters? Because writing to and contact with Westerners surely was under severe surveillance of the KGB.

Last year I already visited Andrej in Hamburg, while cruising through Mecklenburg, where I was searching for the places connected to another 'research victim' of mine: the highly talented piano student Grete Trakl, sister of the famous Austrian poet Georg Trakl (1887-1914).She was married to a man who had his roots deep in the Mecklenburg nobility. I hope to launch her remarkable biography in 2014 in Salzburg, at the centennial of Georg's death.

In Hamburg, Andrej told me he had a suitcase full of memories of Ben in his house in St. Petersburg: correspondence and music records he received From Ben and Bernard Haitink from 1974 onwards. I was delighted! It is the dream of every historian to be able to piece two sides of an history together! Andrej told me he really wanted to tell the whole story, so I said we should continue this event in the Netherlands, where in 1990 Andrej had his first concert after the fall of the Berlin Wall. 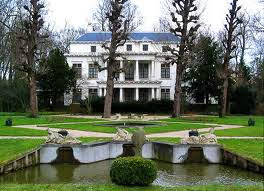 Well, plans stay plans, until they are realized. And sometimes they just need time to simmer, before the perfect circumstances present themselves. When nothing seemingly happens, it does not say that the wheels are not in motion. The threads came together in March this year. Jeroen Hommels has his business at an estate De Tempel (The Temple) near Rotterdam, the place where Andrej had his first concert in the West.
The estate is a truly idyllic place, dating back to the 18th century. With a romantic garden to stroll in, and with two Steinway pianos ready to play. The ideal place also for an invited-only memorial concert, which we are now planning within the Russia-Netherlands friendship year 2013. 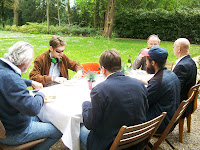 On Thursday morning everything fell into place. It even was wonderful weather - since then it has only been raining in Holland - so we could dine out in the garden, like the happy few who had built and lived in the house. Guido served Genovese octopus, a traditional recipe from his Italian grandmother.

But it was hard work too. Because as soon as Andrej came in, he tested the grand piano's and started talking at the same time, so the camera crew had to get their gear rolling immediately. Fortunately, we had already decided on using hand-held equipment, to keep the gathering as natural as possible and to be able to move around easily.

This choice only proved somewhat of an unexpected physical struggle during the main interview in Russian, held by Robert - who is also fluent in Russian - in order for Andrej to be able to speak freely. Because the interview lasted more than two hours. In one stretch. No breaks. No single one.

Andrej had so much to tell, that the crew had to follow him like two bees who are after the honey. You never knew when Andrej would come up with an interesting story about his youth, his career, his friendship with other Russian composers and performers, his analyses of the Russian political situation and the influence it had on the musical culture in his country. Andrej escaped being sent to a Gulag camp by an inch because of his persistence in staying into contact with Ben - and Ben had to dodge the KGB more than once by staying privately at Andrej's house.

The next day we visited the house Ben and Guido lived in, in Zierikzee. There Andrej met Ben's nephew Wim, and was utterly surprised to see how strong the Joppe genes are, because Wim's features and posture are very much like Ben's. In the house, Andrej stepped into Ben's living world of sound and colors he only partly knew, because most of his oeuvre was painted in the last 15 years of his life, after he quit working for Ben Haitink.

Andrej found the first record he gave Ben, back in 1974, and recalled how they spoke constantly about music, painting, and the sea, Ben's most important source of inspiration. He sat at Ben's desk, reading his own letters, with Guido's picture of the sea behind him.

Of course we also went to the sea close by, where a stormy wind, the sun and the clouds changed the color of the sea within minutes, just as Ben had told Andrej. At the end of the day, Andrej dug happily into Zeeland fish in the nearby restaurant.

Now we have 12 solid hours of documentary film. Part is in German, part is in Russian. We know what are job is during the next few months!