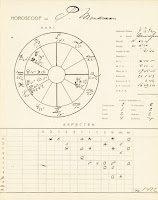 
The maker of the horoscope was Adriaan van de Vijsel. It is typeset at the back of the horoscope. Ah, Adriaan! Another name I know from the membership list of the Theosophical Society. Adriaan was an office clerk and became a member in March 1905. His brother Arie and his nephew, also named Arie, were or became a member too. I also knew that Adriaan had married the daughter of the sculptor Bart van Hove. Father-in-law had been the director of the Quellinus Art School (from which e.g. De Bazel graduated) and after that he taught sculpture at the Rijksakademie, which Mondrian attended. Also, Bart van Hove was president of the artists’ club Arti et Amicitiae, of which Mondrian was a member.

Surfing internet on more information about Adriaan – back then in 1994 Google was not so prolific in its sources – I discovered, to my surprise, that his daughter was still alive and alert. Next week, on 12 March, she will turn 95. I tracked her down and visited her two weeks ago for more information on Adriaan. And for photo’s. Who was he? What was he like?

Adriaan was a descendent of a line of wood traders. As the oldest son he would have had to take over the company, but apparently he was better in books. On several photo’s he sits there, studiously reading a thick book. But Adriaan was not a boring guy. He appears to have been adventurous from an early age. Even though he found a replacement for his army service in Holland, he served in the Dutch colonial army in the East-Indies and traveled around the islands until 1905, after which he returned to Amsterdam. His early interest was in alchemy and especially medicinal herbs. He translated a book by Paracelsus from Latin into Dutch in 1913. Adriaan was immersed in every esoteric organization then existing. In 1916, he bought a 40 hectare piece of woodland in Den Dolder – a place then especially known for its notorious clinic for the insane. Adriaan worked his butt off, but with his second wife he successfully turned the woods into an enormous herb garden. With his wife he traveled Europe by rucksack, trying to find rare herbs. The garden products were sold to apothecaries and factories of homeopathic medicine. The Van de Vijsels kept an open house for like minds.

But how did Adriaan and Piet Mondrian meet? Without concrete evidence – except for the horoscope – I will have to describe the possibilities. 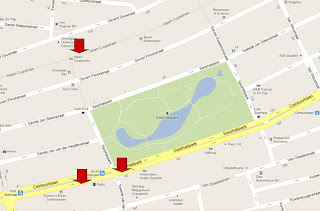 Mondrian obviously needed wood for his picture frames. Brother Arie van de Vijsel, theosophist since 1908, had a lumber store at Ceintuurbaan 330. You can spit from there to Mondrian’s house at Sarphatipark 42, where he lived since 1908. That would narrow evidence down conveniently. But Mondrian lived at Albert Cuypstraat 158 before that, which is also not far away. So this does not solve the issue.

Would sister Constantia van de Vijsel be a better option then? She was a member of Arti et Amicitiae, like Mondrian. She studied at the Rijksakademie from 1902 until 1910.

Then there is sister Ida van de Vijsel. In 1910 Ida van de Vijsel married Hendrik Teves in the Dutch Indies and she lived there for a long time, possibly until 1928. But Ida is in the database of the Netherlands Institute for Art History as an artist. She was also trained at the Rijksakademie, by Nicolaas van de Waaij. In his list of students several names pop up in direct connection with Mondriaan. The ‘Amsterdam joffers (misses)’ Lizzy Ansingh, Betsy Westendorp-Osieck and Betsy Repelius. Mondrian painted two ceilings for the last-mentioned Betsy in 1904. Then Leo Gestel and Jan Sluijters, the Dutch ‘luminists’. Sluijters, Mondrian and the theosophist Kees Spoor exhibited together in the Stedelijk Museum in 1909; this exhibition actually was the ‘coming out’ of Mondrian as a theosophical painter. In the list also the theosophists Loe Reelfs and Herman Mees are mentioned, and Pieter van der Hem who lived in the same house as Mondrian at Sarphatipark. In short: this small network offers a lot of possibilities.

Ida is an interesting link. Because Adriaan van de Vijsel’s daughter told me thus. The two works mentioned in the Mondrian Catalogue Raisonné as The Blue Tree (A673) and a seascape (A696) and dated by Welsh at 1907-1909, show a wrong provenance. They were not in possession of either Adriaan or W.C. van Dijk, who are mentioned as the first owners. No, Adriaan received these works after WWII from his sister Ida. Adriaan however had read what the market value of these works had become, and refused to accept them for various personal reasons, one of them not to attract thieves. 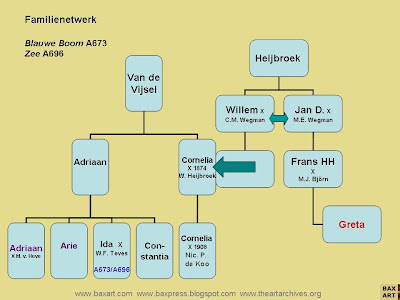 Then there is a last but interesting link. Namely: Greta Heijbroek. Mondrian is said to have given her painting lessons in 1909. In 1911 they became engaged, to everybody's surprise. Heijbroek…? The name also surfaces in the Van de Vijsel family. Yes, by Jove! Greta was a cousin through her aunt! Now I become interested in the guest book of the family Heijbroek again! Who else are mentioned?

All in all however: no conclusive evidence, but a lot of leads. Maybe dating the horoscope is best done through the horoscope itself? Better said: horoscopes, in plural. Mondrian had, in fact, two prepared. First he asked for a ‘trial horoscope’. It is numbered 1422 – Adriaan apparently was a productive and experienced astrologist. He had skilled himself in the new type of astrology, developed foremost in theosophical circles, which system is now commonly used in the Western world. Jutta Lehmann wrote a dissertation on it in 1998.

The trial horoscope is, by nature, brief. It only provides a short description of Mondrian's most important elements: sun sign (Pisces), rising sign (Aquarius) and moon sign (Aquarius). Adriaan called the relationship between sun and moon ‘the polarity’ – a term Mondrian would use profusely in his abstract art.

The synthesis of the influence of Sun in Pisces and the Moon in Aquarius, representative of your individual and personal characteristics, shows love for nature in its most basic appearance, and at the same time your typical reserve and inclination to come into contact with the unseen. It shows views which are generally regarded as ‘strange’.
Your longings and wishes are strong and will often be satisfied. You will soon make friends, move easily among men and you will only be happy in a publicly oriented life, where you can mingle among people.

A love of nature, but then in its simplest form, an inclination to the occult, and ‘strange’ views. It is as if here Mondrian’s abstraction and his position in modern art is predicted. And it also contains the reason, why Mondrian must have felt that moving swiftly to the hustle and bustle of Paris would be of advantage to his career.
The trial horoscope was essentially a prognosis. I did not expect such a prognosis, because this is not the ‘normal’ procedure in astrology. People are foremost interested in a character description, based on a birth horoscope. In Mondrian's case, it was the other way round. The short version tickled him to buy a complete birth horoscope for 3 guilders. This one must have been made after January 1912 – when he was in Paris already – because a letter exists from the Civil Registry in Amersfoort, dated January 30 1912, in which Mondrian receives the time of his birth, which is needed to make an exact birth horoscope.

Which prognoses were in the trial horoscope, which may explain his rather sudden move to Paris?

The years corresponding with certain prognoses were written in the margin by Adriaan afterwards. Marked by ‘1911’ it reads: You are now more susceptible and more impressionable than usual, sensitive to the dispositions of your surroundings.’ Then, struck out: ‘During the last months you have tied new knots and you will do this during the next four months.’ This deletion may indicate that at the time Mondrian received this horoscope, this transit had already passed. Or that he did this after he was firmly settled in Paris.

Left from the section on 1912 Mondrian wrote ‘Jan.[uary]’ over the date ‘1912’ written by Adriaan in the margin. Then Adriaan wrote 1912 left from it again. It looks as if the two men had been discussing the horoscope together and that at that moment the dates were written in the margin. The astrological aspect in question was the influence of Uranus, because Adrian hinted at ‘sudden and temporary changes’. His explanation reads: ‘The time is favorable for applying some new idea to practice, your sphere of influence is growing just as your frame of mind.’

The year 1913 would bring Mondrian new ties, ‘…yes, it can even be the case that you decide to marry.’ The aspect concerned was the Moon (feelings) moving through the seventh house of partnerships from the end of 1912 and at the same time Mars conjunct Venus.
This prediction was contrary to Mondrian’s current opinion about relationships; he had broken off his engagement to Greta Heijbroek not long before. Or did he break off the engagement, because of the hidden promises in his horoscope? However, nothing is known about a love relationship in 1913, let alone a plan to marry.
Well, astrological prognoses are interpretations of energy constellations, and these interpretations contain advices as to how you could and should go with the flow of aspects and transits, because these belong to your unique ‘learning curve’ in life. Opposing them will only cause needless frustration. (Then you also learn of course, but not what was originally intended, cosmically.)
So how did this 1913 transit work for Mondrian? Venus in astrology not only symbolizes love, but also creativity and the arts. Mondrian made use of this energy to go to Paris, mingle with new artistic people and find inspiration for a new visual language. This is in accord with the last sentence of the section ‘1913’, because Adriaan wrote: ‘If you put your effort into is, your work can attract more attention and more appreciation.’

The 1914 prognosis coincides with the period in which Mondrian, because of the outbreak of WWI, was forced to stay in Holland after a visit to his sick father. ‘An anything but favorable period’, Adriaan wrote, ‘It is better not to induce changes or to travel, although this may not be preventable. It is a time of great strain and exertion, for which you will need all your strength to work your way through, but it will have positive effect.’

Mondrian worked very, very hard in Holland. He rose out of this transit as an abstract artist and as the inspirational source within De Stijl movement.