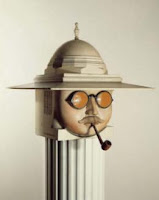 
In 2008 my now late mother Nely (she died16/8/2010) dug into a box full of scraps and pictures and pulled out two old invitation cards, the crease held together with Sellotape. There were letters written on the back of both cards. ‘Look. I have always kept these. Isn’t this funny?’, she asked me, and handed me the cards.

I asked her for the story behind it.

As a fifteen-year old girl my mother was naturally taught English as part of the curriculum of the Marnix Gymnasium in Rotterdam. In one of her study books she found a model letter, addressed to someone living at ‘17 Leicester Road, London, West 1’. On impulse she sent a letter to this address, curious to know who would be living there. After quite some time, on 19 February 1939, she indeed received a postcard, coming from 17 Leicester Road, Wanstead, London E 2. It read:

As there is no Leicester Road in “London, West 1”, your letter wandered around London, until the postman thought it might be intended for me. So I am sending you this card, as you request, in order to show you that your message had been delivered + to express the hope that you will continue your English studies in which you have already made good progress.
I know Rotterdam.

Because at that time it was popular for teenagers to have pen friends abroad, my mother wrote this Mr. Charles Bressey immediately again, asking if he could help her find a female pen friend. There came no answer. To her utter surprise however, she came across a newspaper item on him a few weeks later. It was about a film on his work and his person. He appeared to be a well-known engineer! Immediately my mother sent a letter, in which she wrote: ‘Now I know why you don’t answer: you are too busy!’

A while later she received an answer. It was written on the back of two invitation cards. 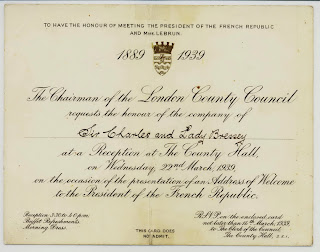 Dear Miss Luitse.
As you have been so clever in finding out all about me, I think you deserve a letter, and then I will ask one of the girls at our high school to continue the correspondence.
I have just come (18.15) from the Reception given to the French President, and I had intended to go home to dress for dinner with the Timber Trade Federation but there is not [enough] time, so I have come to a restaurant for a meal and while it is cooking I will write you a note on the back of the invitation cards. My writing is not so clear as yours, unfortunately, owing to my habit of dictating to stenographers.
It amused me to read your cutting from a Dutch paper about the film concerning London, upon which I have been engaged, - for I had seen no mention of it in English papers (which I have little time to read). This year I am particularly busy because I am president of the Chartered Surveyors’ Institution and also of the Junior Institution of Engineers. Thus I have little leisure to bestow upon my two grandsons. 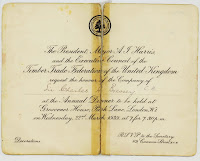 In bidding you “goodbye”, let me say how much I hope that you will play a useful, helpful part in life and try to make other people happy, - at the sacrifice of your own interests:
“Und setzet ihr nicht das Leben ein,
Nie wird euch das Leben gewonnen sein.”
(I expect you read German poetry.)

With all good wishes
sincerely yours
(Bressey’s signature)

Indeed, the two cards are dated on the same day: 22 March 1939. I hope Bressey had already taken his decorations with him that morning, which were required at the dinner that evening…

At home I searched internet for information on this man. Judging by his invitation cards, he should surface somewhere in the upper regions of society.
He did - although the Wiki page on him had not been published yet; it was published 14 February 2009. 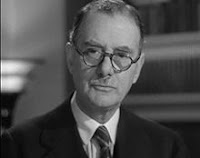 Sir Charles Herbert Bressey (3/1/1874 – 14/4/1951) was the son of an architect, received a thorough education and went to France and Germany for further schooling. During World War I he was a military road engineer in France and Belgium. In 1919 Bressey became Divisional Road Engineer for the London area, climbed up in the hierarchy until he succeeded his boss Sir Henry Maybury as the Director-General of Roads in 1928. In 1935 he was appointed by the Minister of Transport to prepare a report on London's future road transport requirements, up to the mid-1960s. He retired in 1938.

One needs to know that motorized traffic was booming at the time and that speed and uncontrolled driving made heaps of victims in London. Because of that, in 1934 the Minister of Transport, Sir (again…) Leslie Hore-Belisha had introduced the driving test, and a beacon - black and white striped pole, orange lighted ball on top - marking pedestrian crossings. This 'Belisha beacon' still is a typical, unique feature of the London traffic system today. 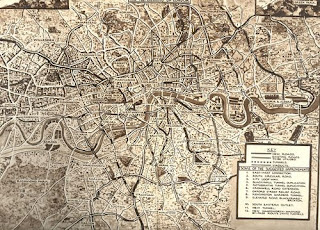 While he studied European cities and called on experts for the next few years, Bressey was assisted in his research work for the report by Edwin Lutyens. Was that why he knew Rotterdam? Most likely. The final report of the research, The Highway Development Survey, 1937 for Greater London, was published on 16 May 1938. In it, Bressey proposed a series of high capacity motorways radiating outwards from the city, triple-story parking garages, large roundabouts and he made recommendations for a series of orbital roads around the city. 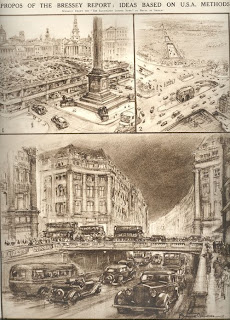 It all sounds very modern. Although many of the pictures published with the plans do have a distinct sci-fi twist to it, typical of the time. The images you see in films and avant-garde architectural drawings of that era. On the other hand, sci-fi can become reality. Multi-storey parking decks are common now, although not smack in the middle of Trafalgar Square (upper left). To any foreigner the multi-storey bicycle decks in front of our Amsterdam train station look just as futuristic.But they are reality for sure.

Searching again recently for this blog, someone had been so kind to upload the film my mother must have read about in the newspaper in 1939. It is called The City, from the series If War Should Come. The film is a long stretch, but worth viewing:

My main interest at this moment – and I’m sure it would have been my mother’s in the first place – is meeting the man behind the invitation cards. In person. Bressey shows himself not only as a model British well-educated gentleman, but also as a very shy and modest person, hardly looking into the camera at all. His ardent love for his work shows in the way he directs the attention away from himself immediately to the plans, and in the way he moves his fingers over the maps and touches the paper.

Bressey kept his promise: my mother did get her pen friend after all. However: it was no success. There might have been too many cultural differences. Besides, Rotterdam was bombed shortly after, on 14 May 1940. Attention was quickly needed elsewhere. After the war my newly-wed parents emigrated to Canada, on the day Bressey died.

My mother never forgot Bressey's lines of poetry. She lived her life accordingly and once in a while recited them, moralistically, to us, children. Back then, we hadn’t the foggiest about the story behind it or who wrote the lines, and she never told us. Now I know: they were taken from the war trilogy Wallensteins Lager (1797/8), written by the German philosopher Friedrich Schiller.